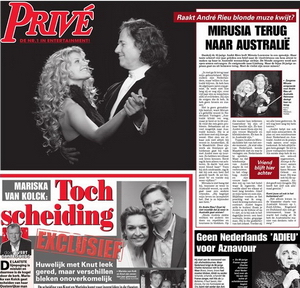 Thursday February 17th, 2011
Addapted from de Telegraaf,
article by Wilma Nanninga
Is André Rieu going to loose his muse ?
Amsterdam
Thanks to 61 year old André Rieu, Mirusia Louwerse is living in a fairytale.
Four years ago, her aunt wrote a letter to the violinvituoso to make him notice her Australian niece.
He welcomed the beautiful blonde with open arms and she went to Limburg, Holland.
But because of homesickness, the nearly 26 year old soprano returns to het homecountry.
Is the violist going to loose his muse ?
"I'll return home in May. My parents are Dutch, but the want to stay in Australia.
I've missed them very, very much, the last few years and I don't know how long they'll live in great conditions.
Maybe they're sick or, even worse, dead in five years.
They are the only I've got, I don't have any brothers or sisters."
It wasn't an easy descision because Mirusia's boyfriend live in Holland.
Shy she says: Äustralia sounds far away, but you're there within 24 hours.
I don't mind the trip at all an Sebastiaan will come as much as possible to Australia.
He's already been eight times over there. And because he's Dutch,
we don't always see each other over here: he lives in Amsterdam, I live in Maastricht.
Because of his job as a soundengineer, he often goes on tour with André.
That's the way we've met. The first I saw him, I only saw his back. "What a beautiful blonde !",
I thought, but when he turned around, I could also see his lovely face.
I said "Hi" and felt like a fifteen year old girl !
Mirusia isn't affraid he'll be looking for another girlfriend, once she's left for Australia.
"He understands my life and accepts the way it goes. That's so special about him".